Our Cheese Care Manager spends a week in Vermont 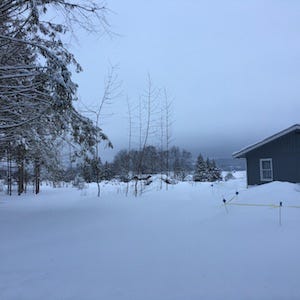 As I landed in Boston Logan ready for my Jasper Hill Farm adventure, the heaviest snow storm in years swept in and the city was left knee deep in snow. Then, while the hordes of workers filed out to clear the pavements and roads with shovels in hand, I imagined what the route North to subarctic Vermont would look like.

Despite my concerns, it ended up being fine thanks to our all-wheel drive vehicle. That is, until we ventured onto the back roads, where we narrowly missed the undefined road and beached on a covered snow bank. Fortunately, we were lucky enough to be within walking distance of our lodgings.

It is the norm at Jasper Hill Farm to start early and finish late. So, in order to get the authentic experience, we braved Jasper Hill’s notorious elements and trudge out at dawn. Matteo and Andy Kehler began their farming and cheese-making activities in 1999. Their vision was to bring life back to the dying dairy industry in the region that they loved. It was a bold move at a time when those around them couldn’t sell up farms fast enough.

We spent hours in the most fascinating of classrooms, learning about the dominant fungal and bacterial colonisation patterns, the timescale of colonisation and its impact on maturation. Then we got onto the behaviour of natural Lactobacillus in milk at various temperatures and how this effects cheese texture. Perhaps this isn’t so fascinating for everyone, but to me it was heaven!

The most admirable thing I noted was how everyone wanted to break down the facts to their raw elements to gain an understanding and start to reconstruct the cheese from a microbial level. Samples were taken from smear cultures, ready to split down in a process so complex that it was similar to DNA sequencing. All this helped to better understand what was happening on the surface of the cheese, how the colonies interacted and, most importantly, asking the question, “Why?”

For instance, why is that crystalline texture present on my washed-rind cheese? Why does my blue cheese taste of bananas after it has been aged for exactly three weeks?

The work being done here is helping the great Universities in the area, including Vermont and Harvard. Cheese is the perfect and reproducible substrate for microbiological communities.

I was honoured to be given access to all areas of the business. We began out on the land, which was left to the imagination because of the four foot of snow that blanketed as far as the eye could see. 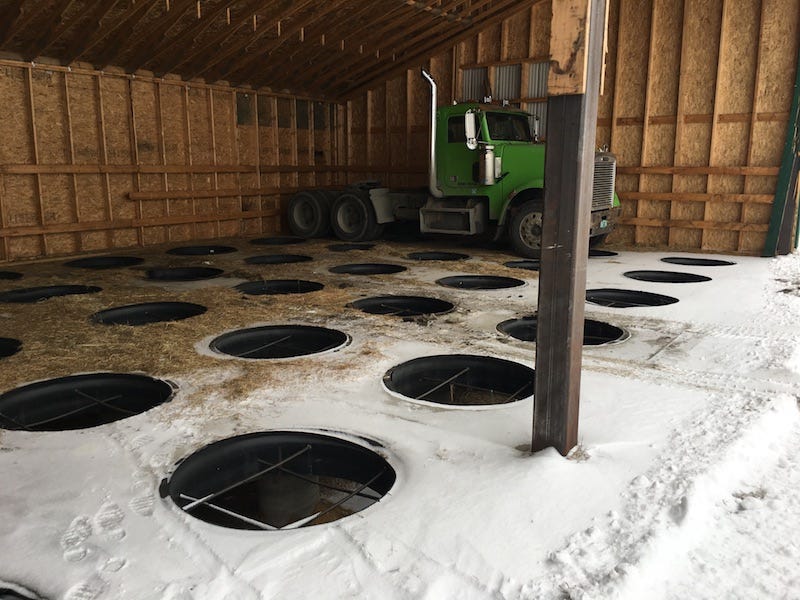 What impressed me the most was the brothers’ latest bit of kit, a state-of-the-art hay dryer. In a land that spends half its year under snow, it is vitally important to provide cows with a wholesome and nutritious diet during winter. Similar to the UK, Vermont’s summers can be unpredictable and it is not prudent to rely on four days of sun to bail hay.

The use of silage is not possible due to the style of cheese the dairy makes. Rather than sacrifice their cheese’s core values, an alternative was sought. The phrase “path of most resistance” was regularly spoken when describing this incredible piece of kit, but it appears worth it. I had never seen hay in such a vibrant green colour. The farmer is sure to test each batch too in an effort to send various grades for the cows to feed on daily, which provides a constant and varied diet. 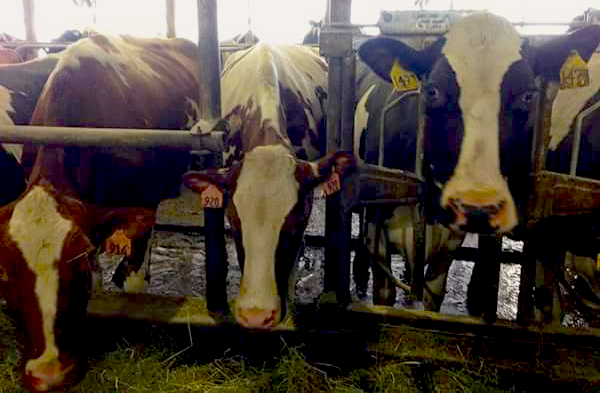 Later, we were shown the small herd of 45 Ayrshire cows, which had steadily grown from the original 12 in 1999. They were healthy and glossy, clearly well looked after and lived long, happy lives. I would happily return in the Spring, as the snow melts and they return to fresh pasture, just to witness the cows as they allegedly jump and frolic into the paddock because they know the warmer months are approaching.

Our next port of call was the Vermont Food Venture Centre, an amazing concept where Jasper Hill lease a permanent space. Here they make Harbison and Alpha Tolman. A batch of Harbison was reaching the end of its coagulation process as we arrived and we observed as the junket was hand cut and tipped into moulds. They worked with five bins to stagger the setting of the curd. The bespoke equipment that was present then allowed workers to archive 110 cheeses for each bin. Great attention to detail was paid after the curds were poured, as the cheese makers carefully examined their volume to ensure a uniform size.

The rest of the centre is communal kitchen spaces, helping people to kick-start their culinary adventure, whether that’s chutney or ready meals, until they’re able to afford their own space.

Our grand tour reached its final stage as we ventured into the seven-chamber maturation rooms, blown out from Jasper Hill with explosives in 2008. The thick, curved concrete chambers were carefully planned in order to provide the perfect temperature, convection, gas exchange, flora and wind flow. Cheeses from other cheese makers are conditioned here using a different approach to what we’re used to in Europe. Jasper Hill will buy all of the cheese makers stock, then sell, market and distribute it. The most recognised cheese that benefits from this conditioning is Cheddar-Giant, Cabot Cheddar, based approximately 10 miles south of the farm.

In 2003, Cabot Cheddar asked Jasper Hill to take a cheddar, cloth-bind it and then mature it for them. The conditioning and maturation techniques assisted in winning the cheese best in show at the largest American cheese show. Now, 5000+ wheels are matured at one time, filling the largest of the chambers. It is the first and most-recognised cloth-bound cheddar made in the US.

The Kelhers have worked closely with one of our own, local cheddar makers, Tom Calver, to encourage his pursuit of sub-terrain maturation. Of course, we all know how that ended. Tom opened his new cave in May 2016. Back in Greensboro, there is already talk of the world’s second cheddar-turning robot, inspired by Tina Turner at Wescombe Dairy. I can’t wait to discover what this one will be nicknamed!