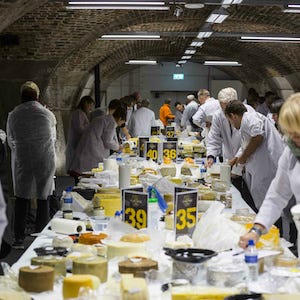 Blu di Bufala wasn’t far off making it a perfect night. The cheese was awarded 69 points out of a possible 80 by the Super Jury of 16 judges, just shy of outright winner, Cornish Kern. It’s another tremendous accomplishment for a cheese that can’t seem to stop winning.

The trophy cabinet of Blu di Bufala must already be filled to overflowing, counting gold at Mondial du Fromage 2013 and 2015, and World’s Best Italian Cheese at the World Cheese Awards 2012 among its wins.

Not shaped liked the typical wheel many cheesemakers use, Blu di Bufala is almost a perfect cube. This light-flavoured blue cheese has a sweetness that perfectly accentuates the aromatics of the penicillium roqueforti, while the slightly open texture keeps its shape and melts in the mouth.

Held at the Tobacco Dock, the 30th anniversary edition of the awards formed part of this year’s Taste of London Festive Edition, and saw over 3000 entries from a record breaking 35 different countries. Several of our other artisan cheesemakers won big too.