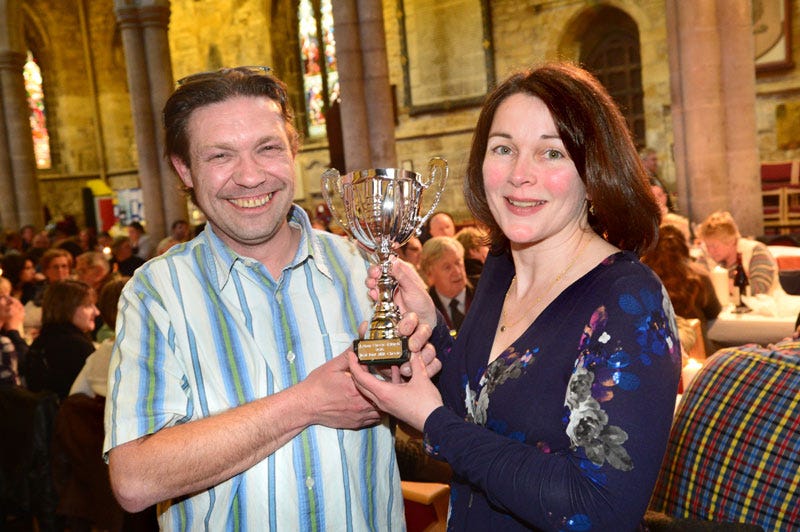 As proud sponsors of the Best Raw Milk award at the Artisan Cheese Awards in Melton Mowbray, our very own Cheese Care Manager, Ruth Raskin, was given the honour of presenting this prestigious accolade.

Unlike other specialist cheese awards, this event was designed specifically to recognise the craft and skill of the small artisan cheesemaker. Entrants were only permitted from producers of less than 250 tonnes a year and many produce below the 50 tonne mark.

The Fine Cheese Co. sponsored the 'Best Raw Milk Cheese' category, and it was Teifi Farmhouse Cheese, the Welsh-Dutch family company, that picked up first place. Its Celtic Promise cheese, a Caerphilly-style, washed-rind cheese with a slightly moist, pink rind, was given maximum points for appearance and presentation and was deemed "interesting, with great eye appeal" by the judges.

A very high score was awarded for Celtic Promise’s body and texture, while it garnered almost maximum points for flavour and aroma. Overall the judges felt it was "a very pleasant and well-made cheese".

Success for friends of The Fine Cheese Co.

In addition to our sponsored category, it was a great night for other cheese-makers with whom we work closely. Bath Soft Cheese won' Best Organic Cheese', 'Best Semi-Soft Cheese' and Best Blue Cheese for its Bath Soft, Wyfe of Bath and Bath Blue. Also, Lyburn Farmhouse Cheese won Best Hard Cheese for its Old Winchester.

For those that love a good statistic, more than half of entries were from raw milk (55%), most cheeses were vegetarian (72%) and 12% were organic.

Matthew O’Callaghan, Organiser of the Artisan Cheese Awards & Fair, felt the inaugural event was a huge success. “We were delighted with the response to this, the first Artisan Cheese Awards. Teifi’s Celtic Promise was a worthy winner of the Raw Milk class and achieved one of the highest scores in the competition,” he said.

“Fortunately the 10,000-plus visitors at the Artisan Cheese Fair were able to sample and buy the cheese for themselves as Teifi has been a regular exhibitor at the Fair almost since the beginning. This year we had 62 cheese makers, but Teifi still stands out as one of the most sought-after stalls in the Fair.”