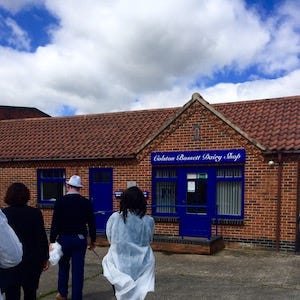 As we approached the village of Colston Bassett, the clouds parted and fields of vivid green grasses were bathed in sunshine. It was such a welcome sight from what was an otherwise grey and dreary journey to Nottinghamshire.

We entered the creamery though the Dairy shop, which proudly displayed two products; Colston Bassett Stilton and Colston Bassett Shropshire Blue. Such simplicity is truly admirable, and the continuous stream of locals through the door is a testimony to the quality of this classic cheese.

Billy Kevan gave us a potted history of the dairy, naming the five Head cheese-makers who have been at the helm since the co-operative was created 104 years ago. The proud tone he used when explaining his part in the dairy’s continuing story was rather humbling. Is it the quality of the cheese which retains staff long periods? Or is it the solid body of knowledge, handed down from one cheese-maker to the next, which encourages such exceptional quality? We think it is more likely the latter.

Hung on the office walls, were pre-WWII images of the young creamery. The old dairy entrance, which can still be seen from the office today, was pictured behind wagons holding milk churns. Each full churn would have made a single cheese and there must have been no more than 20 in the photograph. These 20 would’ve been the total day’s make.

We witnessed the arrival of today’s milk tanker, which held rather more than that old wagon. There may have been more milk, but it had only been collected from four neighbouring farms, all within one and a half miles of the dairy. 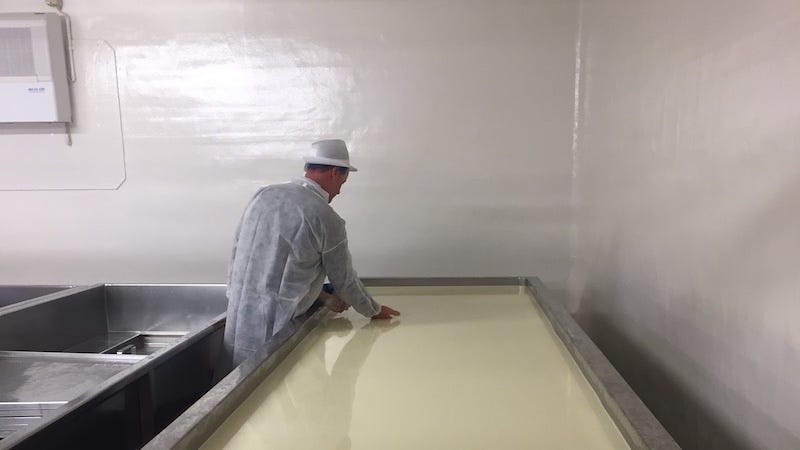 The four farms are an integral part of the co-operative and Billy regularly meets the farm owners to discuss milk quality and their farming techniques. To describe the group as a co-operative, doesn’t quite give the sense of their collaboration. The four farms and the cheese-making operation are five equal partners, working together to achieve greatness.

As Billy began the tour, it was clear that cheese-making is in his genes. He explained technical details with great ease, while keeping it simple so that even a novice could understand. Not only did he describe the making of Stilton, he could also explain the subtle differences between the processes for creating Stilton compared a Cheddar, Cheshire or Caerphilly.

Billy has a great attention to detail, from how the cheeses are chilled before shipping, to the gentle technique used to pack the cheeses. He even took five minutes out from our tour to help a young cheese-maker understand the correct setting point for the curds prior to cutting. The ability to pass on such an intrinsic measuring technique showed an artist at work, handing on the essential knowledge required to create a new expert maker of Stilton.

On our tour, we followed the production route, from the arrival of the milk to the final cheese. At this point, we entered the new ripening rooms; four perfectly identical rooms with optimum conditions for maturing Stilton. The first was a tease, containing cheeses too young to taste. In here there were some that were hot off the press and others, which were freshly spiked. Varying degrees of rind development progressed down the rows of familiar barrel-shaped cheese. 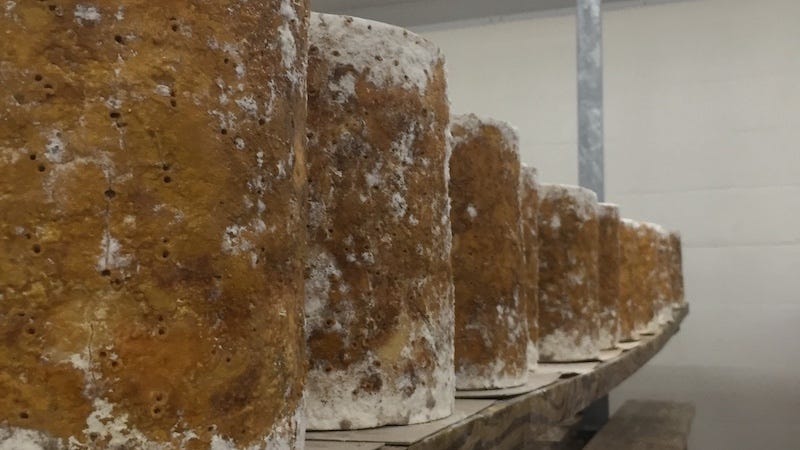 The second room contained cheese that was young, but perfectly edible. The exterior of the cheese was well formed and inside the enzyme activity was beginning to make its presence felt. The cheese in the third room was just right, with an even, smooth breakdown and a rounded meaty flavour.

As we left the site, we once again passed the Dairy shop. Billy stopped to suggest to a local regular customer that he should take his grandchildren to the Melton Mowbray Artisan Cheese Fair that was taking place shortly after.

Billy is a man who clearly has his finger firmly on the pulse of Colston Bassett. He is responsible for continuing to build the world-wide reputation of Colston Bassett Stilton, for maintaining the quality of his cheese, for managing the financial affairs of the Dairy, and yet, he still takes time to get to know his local customers and to care about the end plate that each of his cheeses is destined to grace.